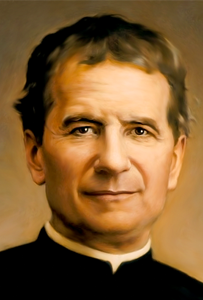 Saint John Bosco, commonly Known as Don Bosco, was an Italian Catholic priest who dedicated his life to the education of young boys. He was born at Becchi, near Turin, in Nothern Italy, on 16th August 1815.

Don Bosco was kept away from regular schooling because of many difficulties. His father died when he was two and so his poor family needed his services at the farm. Bosco’s elder stepbrother opposed all his plans of getting even an elementary education. Yet through sheer dint of will power and the help of many generous hearts, he got himself educated to support himself. At this time he worked at odd jobs – all of which he later taught his orphans.

After he became a priest in 1841, he expanded his work for poor and abandoned boys. Born and bred in poverty and having grown up among boys who, for want of a decent home, lived in the streets, he understood well their yearning for food and love which were never adequately satisfied in their homes.

To cater to the needs of such boys, he started an ‘Oratory or Boys Club’ open to all the boys who wished to spend their time usefully. In order to perpare boys for skilled labour, in 1853, Don Bosco turned his mother Margaret’s Kitchen into a make -shift cobbler and carpenter shop. This was the first Catholic trade school in Italy.

With the dedicated group of followers who gathered around him, he was able to help the street urchins to become honest citizens and God-fearing men.

To win the hearts of the youngsters he used “The Preventive System”. Don Bosco explained it as a happy blend of reason, religion and loving kindness. In fact when asked about the secret of his immense success with youngsters, he simply answered “Love”.

To continue the work that he had started he founded in 1859, a religious society of priests and brothers, known as Salesians (SDB). They are a group of persons set apart within the Catholic Church for the education of youth, especially the poor and the abandoned. To spread his work to needy girls, with the help of Saint Mary Mazzarello, he founded a society of nuns called “The Daughters of Mary Help of Christians” (FMA), in 1872 commonly known as Salesian Sisters. Besides these two, in 1876, he founded a third spiritual family called “The Union of Salesian Co-operators” a group of men and women, married or unmarried who, without becoming priests or nuns would work for youth in the spirit of Don Bosco.